For those who prefer executive summaries, just scroll down.

Don't get me wrong. I am a full supporter of Collaborative Decision Making (CDM) whether it is driven by EUROCONTROL, FAA, SESAR, an airport operator, a local ATC, or even a software vendor. However, CDM, as I understand it, goes beyond data exchange. It is the participation of the airport community when it comes to decisions of the airport about the development of future infrastructure and in daily operation.

According to publicly available information improvements by ECTRL A-CDM include reduced taxi times, fuel savings, better slot adherence, less late gate changes, less network delays, and higher arrival and departure punctuality. The departure punctuality might be the most important element in this list for an airport and its stakeholders. Why? Because airports, airlines and service providers need to allocate reserve capacities for strategic (already planned buffers) and tactical (operational day) delays.

In my recent post about airport punctuality myths I mentioned that I conducted some research about the effect of ECTRL A-CDM on departure punctuality. There were two problems with this. First, as already pointed out in the other post, departure punctuality measured in percent is an imperfect metric. And I am still going to use that impudently. Secondly, there is not much data publicly available.

For the following analysis I used data from the Association of European Airlines (AEA) who themselves receive data from airlines and Central Office of Delay Analysis (CODA). Unfortunately, the data only covers AEA airlines and it does not include passenger figures. But for the sake of this analysis I assume that AEA airlines traffic is the most critical (in terms of turnaround process for instance).

What did I analyze? I investigated all A-CDM Airports according to the DPI implementation status and split them in two categories: (1) Fully compliant (DPI operational) and  (2) Locally implemented. I was expecting the following effect from an A-CDM implementation: (a) sustainable improvement of punctuality after implementation, (b) solid punctuality during adverse conditions (i.e. last winter), (c) continuous improvement, i.e. actual year at least as good as last year with more traffic or better than last year with less traffic and (d) a positive punctuality trend in the last 12 months.

Executive summary:
The following table lists the investigated airports and the findings. Example charts of individual airports can be found below.

In a nutshell:
And one more thing which I noted during the analysis:

Here are some example charts of the investigated airports. If you would like more of them, just let me know - jweder (at) neuropie.com. 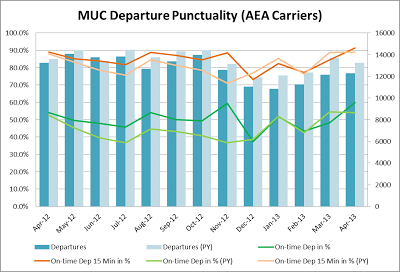 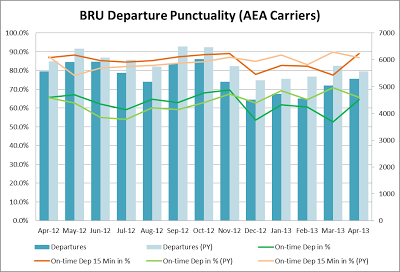 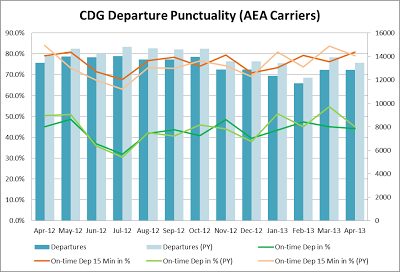